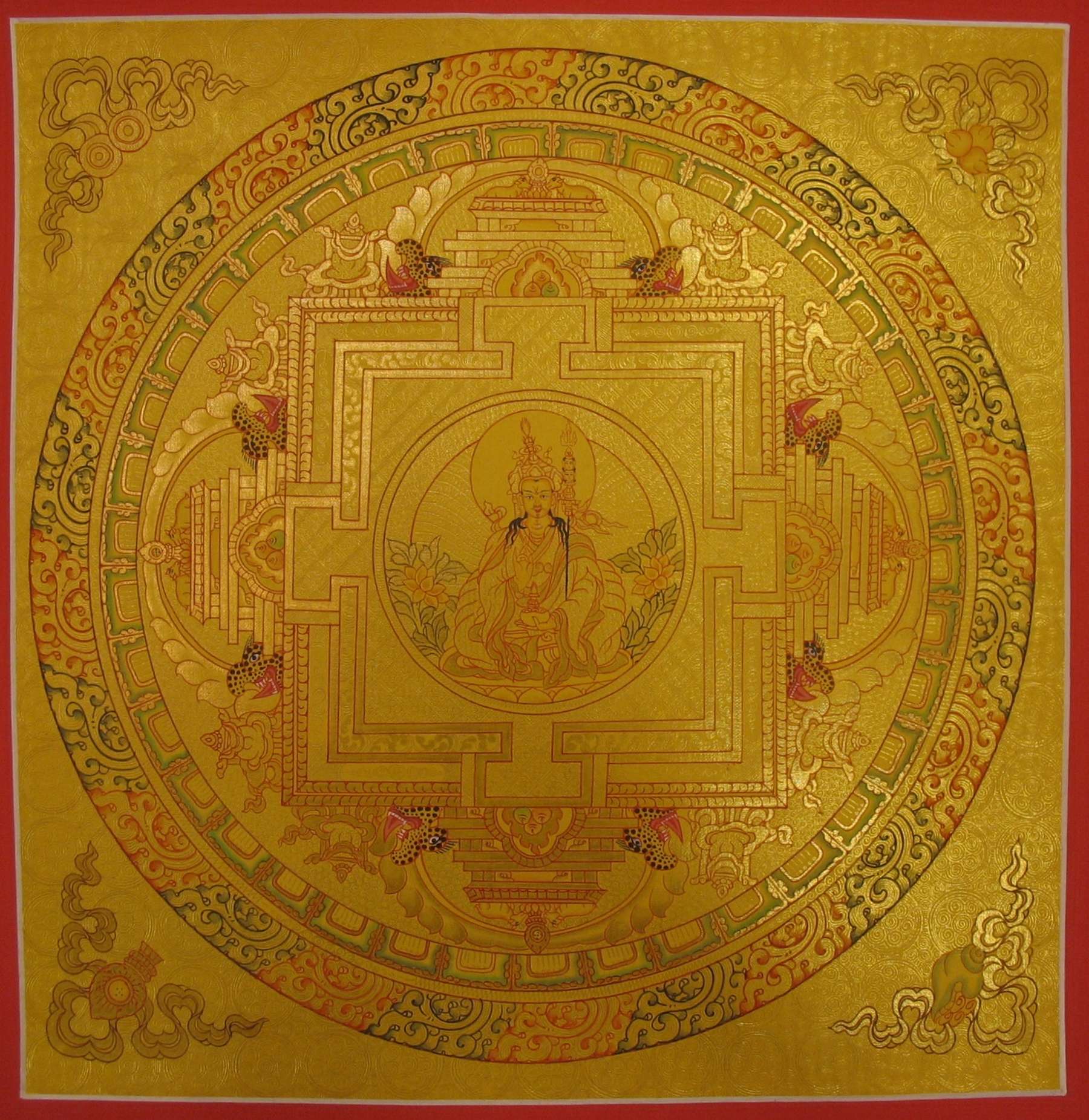 Guru Rinpoche mandala is handpainted on cotton canvas. It is a beautiful red background and fine golden finishing. Padmasambhava is generally referred to as Rinpoche which means precious master.

Guru Rinpoche is presented at the center of the thangka. Guru Rinpoche is also referred to as the Second Buddha as he’s so important for assisting in the founding of Tibetan Buddhism in Tibet. It is because of his activity that the Dharma was firmly established in the ‘roof of the world’.

Guru Rinpoche was born in the 8th century and he was a tantric master and famous for performing miracles. He did not become enlightened gradually, or start practicing the teachings of Buddha Shakyamuni and eventually achieve enlightenment. Guru Rinpoche incarnated as a fully enlightened being.

Guru Rinpoche is a totally enlightened being, a fully awakened one, a buddha.

The Khatvanga, a danda with three severed heads denoting the three kayas (the three bodies of a Buddha: the dharmakaya, sambhogakaya, and nirmanakaya), crowned by a Trishula and dressed in a sash of the Himalayan Rainbow or Five Pure Lights of the Mahabhuta is a particular divine attribute of Padmasambhava and intrinsic to his iconographic representation.

His two eyes are wide open in a piercing gaze. On his body, he wears a white vajra undergarment and, on top of this, in layers, a red robe, a dark blue Mantrayana tunic, a red monastic shawl decorated with a golden flower pattern, and a maroon cloak of silk brocade. He has one face and two hands.

In his right hand, he holds a five-pronged vajra at his heart; and in his left, which rests in the gesture of equanimity, he holds a skull-cup in the center of which is a vase of longevity filled with the nectar of deathless wisdom. Cradled in his left arm is a three-pointed Khatvanga representing the consort Mandarava. On his head, he wears a five-petalled lotus hat.

Wrathful and smiling, he blazes magnificently with the splendor of the major and minor marks. He is seated with his two feet in the royal posture.

You need to Login first